LGBTQI nightlife spaces in London: 1986 to the present 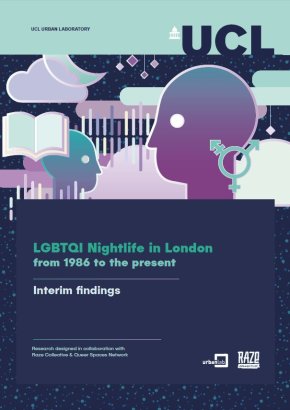 to develop independent research on LGBTQI nightlife infrastructure in London. This work will help inform the Mayor’s Cultural Infrastructure Plan. In making this commission, the GLA note the ‘significant work’ published in the report LGBTQI Nightlife in London: from 1986 to the Present.

The report was informed by research conducted by Dr Ben Campkin and Laura Marshall from the UCL Urban Laboratory between May and October 2016. This initial research focused on the period 1986 to the present. 1986 is significant as the year that the Greater London Council was disbanded, marking a shift in urban regeneration policy. It ended in 2016, at a time of wide reporting and activism around the closure of commercial LGBTQI spaces, with a number of ongoing high-profile cases in the media.

Through surveys, archival work, interviews and public workshops we gathered information on nightlife spaces (e.g. bars, clubs, performance, cultural or other venues) understood to be important to London’s Lesbian, Gay, Bisexual, Transgender, Queer and Intersex (LGBTQI) communities. Informed significantly by participants’ generous and insightful contributions, the resulting report confirmed London’s LGBTQI nightlife spaces have seen a recent intensity of closures, with the largest threats to the longstanding venues, and those catering to women and Black, Asian and Minority Ethnic LGBTQI people. As well as addressing threats and closures, the report highlighted the need to support and acknowledge the significance of emerging LGBTQI venues and events, many of which specifically serve and reflect queer, gender diverse and QTIPoC communities.

At present, following the election of the new Mayor of London, Sadiq Khan and London Assembly members and the selection of Amy Lamé as Night Czar there are renewed discussions of policy change to support culture, social integration and the night-time economy (e.g. an emerging Cultural Infrastructure Plan and Culture Supplementary Planning Guide – strategic documents that will inform the London Plan). Through our interim finding and by working with the GLA on this next phase of research we hope to contribute to the GLA’s forthcoming Cultural Infrastructure Plan to the benefit of London’s LGBTQI spaces and communities.